0
Travel Arbitrage is one of our specialties at PremiumCabin.Deals, this comes in many forms but can be categorized into four major types:

A) Point of Origin Arbitrage:

Airfares are based on many variables such as specific market demand, seasonality, competition and geography. They are sometimes designed to promote traffic on specific routes, a classic example is this Cyprus to Hong Kong and Singapore deal.

While there are many published fares between these markets, one specific fare by UL (SriLankan Airlines) offered passengers willing to add a segments to their flight a savings of over 50% when compared to other available fares.

This was done by forcing the first segment on a partner airline (Qatar) from LCA Larnaca to DOH Doha and the following segments on their metal, in effect forcing passengers to fly via CMB Colombo on the next two segments. While this type of routing does not work for all passengers, those with some flexibility can take advantage of these Premium Cabin Deals. 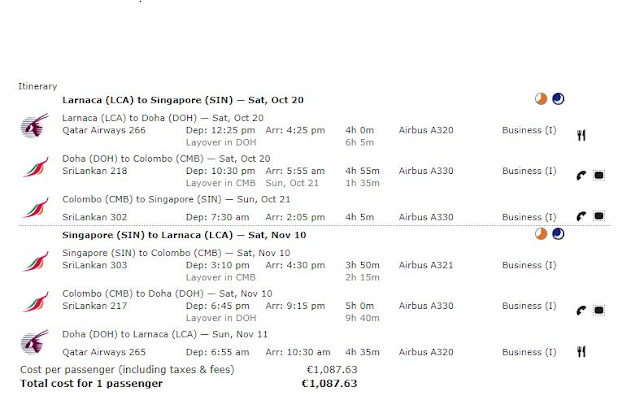 It's interesting because the price is less than half those of other fares listed on Google Flights. The main reason is that it operates with a complex fare rule. Most fares list a variety of city pairs and routing that are permitted, online travel agent systems "read" these rules and produce an outcome that is visible in Google Flights or Orbitz or a variety of other OTAs

In some cases, these fares will not even pop-up on Google Flights only on some OTAs!

Certain cities are dominated by a "hometown carrier" London with British Airways, Frankfurt or Munich with Lufthansa, Madrid with Iberia, Paris with Air France and Amsterdam with KLM among other European capitals.  This gives them a natural advantage in frequent flyer base numbers and contracts with local business partners. But it leads to significant premiums on non-stops flights!
At the same time this creates an opportunity for carrier neutral smart travelers.

Let's use this airfare published in January 2018 as an example: Amsterdam (AMS) to New York (EWR/JFK)
How does this reflect on normal travel? If we take a sample flight in February, purchased more than 30 days before the flight...

Ex. Amsterdam to New York on February 9 returning on the 14th.

But if we are to insert a flight on Lufthansa via FRA (Frankfurt) and still have a non-stop return flight from NYC to Amsterdam (AMS) the price drops to just 1820 USD.

Based upon this example we can see that the dominant carrier KLM partnering with Delta and Air France (all of these are TATL JV Partners so they share revenue from their flights based on confidential % ratios).

Savvy or flexible flyers can encounter savings of 60% or more by adding a segment on Lufthansa or United and taking advantage of lower overall fares.

Egypt, Sri Lanka and Burma (Myanmar) have had devaluations in the past which led to strong savings.

Utilizing these techniques, passengers who are flexible can see savings by adding a segment or connection that can save $1000s off a vacation trip. Our team can build itineraries based upon your expected travel patterns and provide recommendations or alternative travel routes that can lead to significant savings and better travel experiences.


These are some of the most controversial type of fare arbitration. Many airlines claim that utilizing these opportunities is against the Terms and Conditions of their Contracts of Carriage but in many instances the airlines will not seek to enforce these against one-off users of these types of fares.

The classic example (for US based flyers) is the “Last Segment Hidden City”. All passengers on flights to the USA or that connect in the USA must clear immigration and customs at their first point of entry into the country, with the exception of "pre-cleared" flights that originate in Canada; Dublin, Ireland; Abu Dhabi, UAE and of course British Airways 1 which lands in JFK from London City LCY after clearing Customs in Shannon SNN,  Ireland.

If the first point of entry into the USA is JFK, ORD, EWR, IAD, etc and have a connection you must clear immigration and claim your bags.

This presents a valuable opportunity for passengers willing to "break" T&Cs.

JFK-LHR and then LHR-JFK-XXX maybe cheaper than a Round Trip from JFK to LHR.

Now, how does this apply to Premium Cabin Deals?


Let's use this fare (Hidden City fare: HELsinki to MIAmi viaISTanbul (and JFK or ORD) ) as an example.


In this case, the carrier Turkish Airlines published a fare from Helsinki to Miami. The carrier does not operate this flight non-stop instead via its base in Istanbul. But the fare allowed passengers to route via New York (JFK) or Chicago (ORD) and then continue their travels on another carrier to the Miami/Fort Lauderdale area. Savvy passengers who lived in the Chicago or New York area could book this fare, accumulate enough miles to obtain status with certain Star Alliance carriers and save significantly when compares to other airlines in that market.

This type of arbitrage works best for business travelers with a predictable travel patterns.

For instance, if flying between LGA – ORD on a Monday to Thursday pattern. Instead of weekly tickets it can be cheaper to use “Back to Back” or layered tickets.


Want to learn more about these types of fares? Reach out to our team for a Flight Planning consulting session!