3:01 PM
PremiumCabinDeals
0
WOW-ed by WOW Air!
BOS-KEF-BOS
Airbus 321
Back in 2014, WOW Air announced flights from Washington and Boston for as low as $99. Since I had never been to Iceland, I decided to book myself a flight. It was easy to get the return KEF-BOS , but had to play some tricks to get the BOS-KEF segment...

It did mean having to get to Boston, no Avios space on the day I was flying (Friday afternoon) so was stuck with Megabus. It was a slow ride , but had cellphone connection most of the way and a few hours later we arrived at South Station. THe MBTA was free that day (only learned this after buying a Charlie Card) as a way of apologizing to Boston for the horrible service they had during the last Ice Age known as the Winter of 2014/15.

It took a few moments to find the WOW Air desks as most of the signage at the airport had not been updated (this was late April).

Check-in was relatively smooth, I arrived a bit early knowing that I would access via Priority Pass to the Air France lounge at the E concourse. The boarding pass was quirky, as most things with WOW Air.  I was lucky and got directed towards the Pre-Check line, WOW is not a Pre-Check airline so it was nice to avoid the TSA smurf massage I get every-time I opt-out! ;) 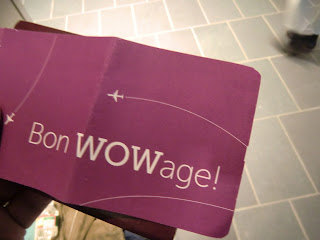 I found my way to the Air France lounge which had a decent food spread with tasty mini-pizzas, some sushi and a variety of sandwiches. I grabbed a few extra ones for the flight over to Iceland.
WOW Air added two Airbus 321 for the new BOSton and Washington (IAD) flights, these are called MOM and DAD (TF-MOM) and (TF-DAD). They have a reversed color-scheme and keep the quirky factor!  Sadly, even if there was a jet-bridge, WOW Air uses buses at Boston which slows down the boarding process. 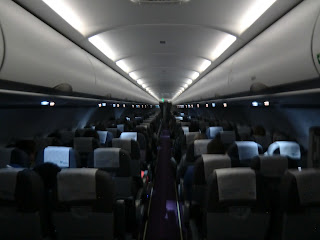 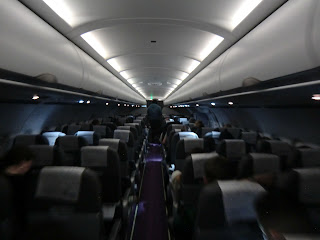 I paid $30  for Row 10 which was the Emergency Exit row. Well worth it with tons of leg room. I was on the B/C side which just has two seats. The Flight Attendant sits across the aisle facing those in the D/E combo. 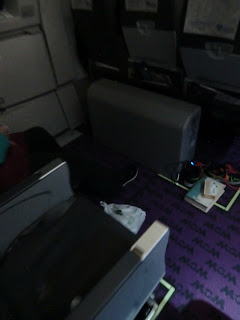 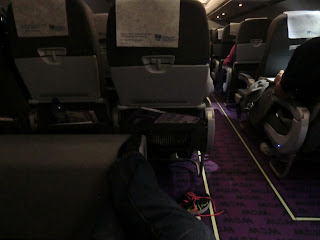 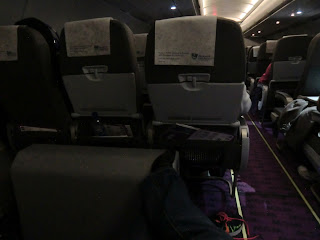 I tried to sleep, and even had a few extra beers from the lounge in a futile attempt to sleep, but made it to Iceland without even a minute of shut-eye. :( I was able to use the opportunity to observe some of the interesting sleeping patterns of passengers.
This girl seems to be able to position her legs almost vertically, it was definitely an interesting, and no clue if comfortable sleeping position. 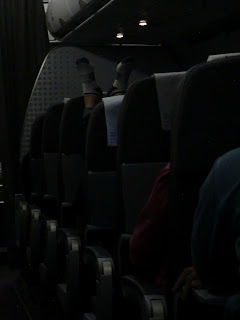 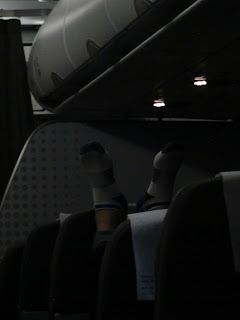 After 36 hours in Iceland it was time to fly back, I had booked 2D on the way back and at airport , (I was travelling back with a friend) we were able to get her upgraded to 2F with 2E not assigned! Score! We ended up using the middle seat as our storage, kitchen area... 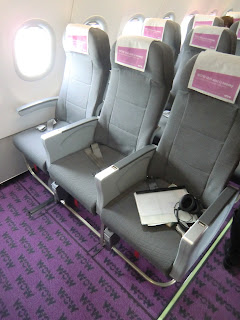 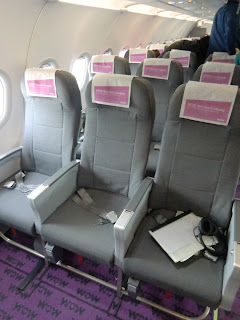 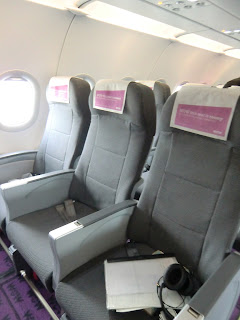 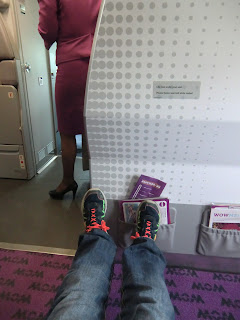 I bought a Pasta salad and a few mini-bottles of wine at the airport and enjoyed them on-board. WOW Air is OK with BYOF as far as I can tell. 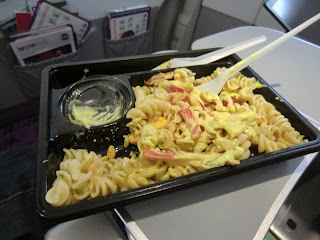 We got some spectacular views out the window over Greenland. 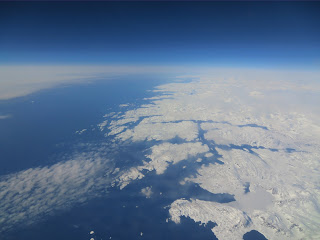 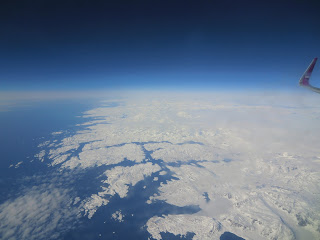 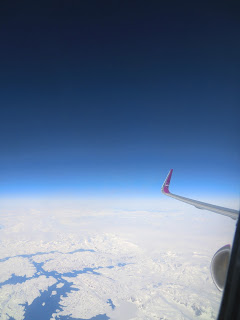 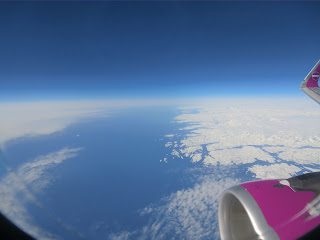 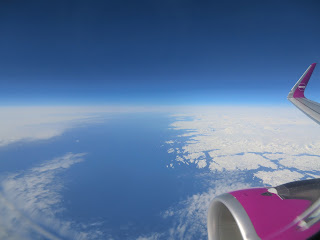 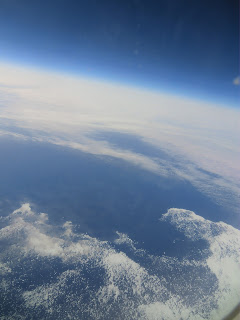 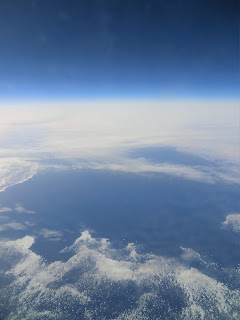 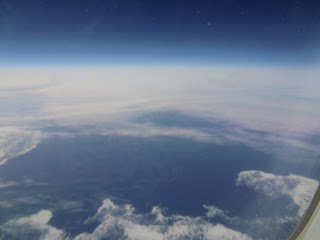 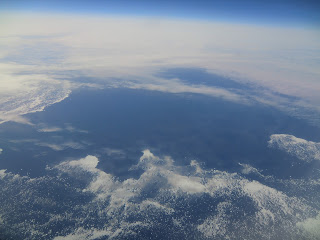 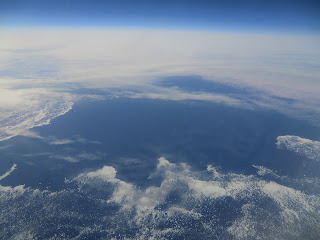 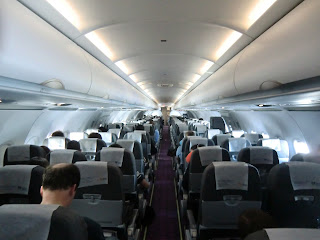 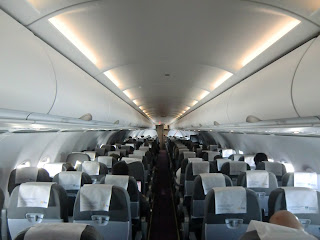 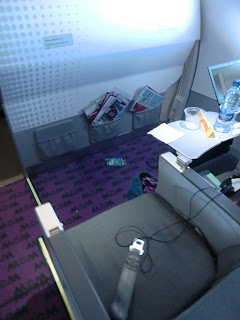 Overall, even if I am not a huge fan of Economy flying, WOW Air is a great experience at it's price point especially when you splurge the extra $30 for Row 2 or 10. We landed on time in Boston and once again had to wait for the buses to take us to International Arrivals. Afterwards, I made a mad dash to my JetBlue flight and was able to change my flight from EWR to JFK due to my legacy expired Mosaic status which I had obtained via a Status Match last year, which for some reason was still displayed on my Boarding Pass. 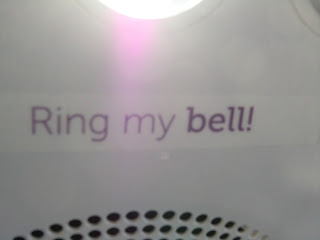